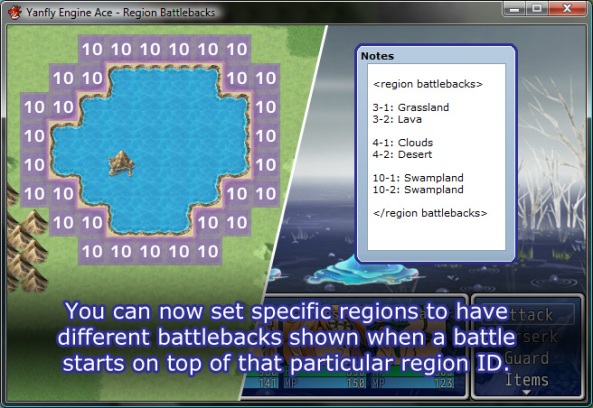 RPG Maker VX Ace lacks any kind of a good battleback management system. All battlebacks for the overworld are predetermined based on their autotile. This becomes a problem when users would like to use different autotiles or when users aren’t using an overworld tileset. This script allows developers to bind certain battlebacks to regions and have the battleback shown change and vary depending on the region ID used if no specified battleback is used for that map.

Insert these notetags into a map’s notebox to give it custom battlebacks based on region:

This will set the region x to change battleback y to the string for the image filename. Insert as many “x-y: string” as needed for custom battlebacks. The region battlebacks that aren’t defined will refer to the hash in the Region Battlebacks script module.