Happy New Year’s Eve everyone! Here’s an Element Reflect script to celebrate for that! Some SMT style element reflecting is always nice to have~ 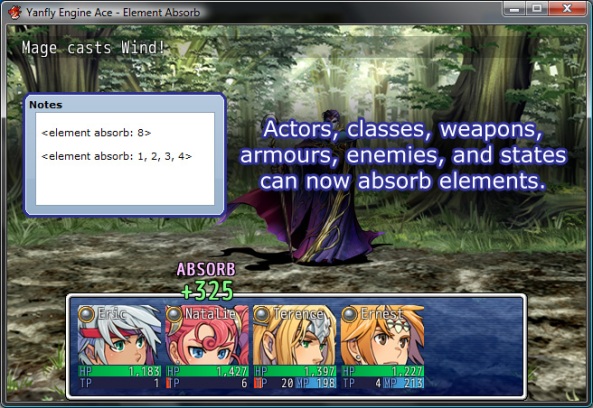 Not sure why RPG Maker VX Ace took out element absorption but oh well, it’s back~ It’s been one of the easiest mechanics to implement (just multiply by -1 if an element is aborbed) but I guess it didn’t mesh well with the traits system multipliers. They could have tacked it on as a separate trait from the percentage modifiers for elements, which is what this script does. I took a different approach this time and actually dropped the current target’s element rate by 200% instead (capping at -1% damage absorption). The reasoning behind this? Well, if a target is naturally tolerant to an element but proceeds to absorb it, the absorption would have a greater effect. If the target is naturally weak to the element, the absorption ought to have a lesser effect.

I ported this script over from Yanfly Engine 6. I’m honestly surprised they didn’t bring this back for RPG Maker VX Ace. Oh well. :(

Nessiah makes emotions for THE MANLIEST RTP CHARACTER EVER!

And so, here’s the first Lunatic Objects Package (shortened as LOP). I’m centering its theme around the idea of Destruction where the user of a skill will inflict damage upon itself for using the skill (such as depleting MP to zero after usage or inflicting a debuff on oneself). It does require the Lunatic Objects script so grab that, too, if you wish to use this.

Atoa makes a nifty way to give enemies a custom death~ Reminds me of Shanghai’s fancy deaths.

Tomoaky makes a script that modifies an item’s selling price~

For those of you who are extremely interested in RPG Maker VX Ace, obtaining a free version of the English release is possible in addition to acquiring it early and helping out with the beta testing period. The contest rules are explained here:

For those wondering, I won’t be participating since I’m actually already selected as a beta tester, but I don’t want other potential testers to miss out on this chance. Let your passion bring you victory and let’s make sure VX Ace’s English release will be successful by testing it together~

It’s not a Yanfly Engine without Lunatic Mode. When I think back, I really should have separated Lunatic Mode in stuff like Custom Skill Effects (YERD/YEZ) and Battle Engine Melody into a separate script. It makes things easier to keep tidy and the whole thing doesn’t have to be replaced whenever there’s an update to the main script. I’m going to go the separate route this time. This script’s made mostly for the more advanced RPG Maker VX Ace users. While I know I often say that my scripts are “Made by a nerd for non-nerds”, I’ll also have to say that now and then, I have to make scripts for “nerds”, too. This is one of them.

Script updates for the day:

Also, I wrote up a small article on how to Design for Delivery and Focus. 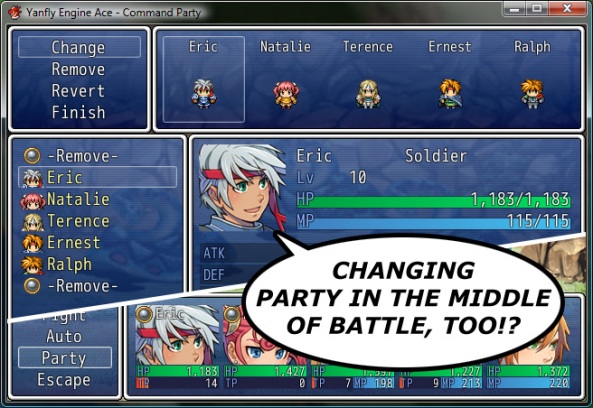 The ability to change party members in battle is now possible with this script. This script requires the Party System script to work. Also, make sure your Ace Battle Engine is updated.

Quite a few script updates today:

Yami releases infective states! This script will provide for some interesting mechanics!

Merry Christmas to the folks that celebrate it! Here’s a script that allows actors to change their equipment in battle. You can restrict the frequency at which actors swap equipment with the script, too. Other than that, it’s a pretty simple and short script.

Kread-EX showers us with a surprising Christmas gift: Cannibalism! Ahaha, only you would come out with such a thing on such a day.

White Devil also comes out with an Item Synthesis script~

And so, here’s the Ace Equip Engine for all your Christmas Eve’ needs. The script provides accessibility to modifying the number and type of equip slots actors and/or classes can have in addition to providing new equip types. The equip scene’s layout’s also been changed for more visual efficiency. While I do like the default RPG Maker VX Ace equip scene layout, I just found it more appealing to have a consistent menu layout throughout as many menus as possible. Furthermore, the script’s menu layout gives way to showing MaxHP and MaxMP, which the default didn’t. Felt kinda silly to me that they wouldn’t show the changes when those values are modifiable in the database editor.

Kread-Ex makes a return from Atelier Meruru with Sneeze! We missed you, man!

Here’s a script to implement restrictions on how often skills can be used. I’ve always found myself liking the concept of cooldowns. They always seem to add that extra bit of finesse in balancing a battle system (as it makes it easier, too). Though of course, I feel otherwise when playing games with cooldowns, but I can definitely understand the necessity for them when the cooldowns are reasonable.

Autobattle returns with this script. The command takes after the RPG Maker 2000 version and Persona 3/4 as well as Final Fantasy XIII. There’s options to even enable/disable whether or not all the party members will participate in battle. I dunno about you all, but I actually liked the Autobattle system back then. It was great for those grindy battle encounters that RPG Maker games always seem to have.

Atoa does it again with SFonts. Use images for your fonts now!